Are you tired of looking at floral wallpaper like I was? The light pinks, greens, and blues were pretty back in the late 80’s and 90’s but not anymore! Many homeowners chose this style of wallpaper and now it’s leftover in millions of homes across the United States just waiting to be removed.

People tell me it’s hard to remove wallpaper. Yes, it may take some time and hard work. It’s easy to become unmotivated by what other say but with the right tools I believe can do anything I put my mind to.

Let’s find out the best tools and the easiest way to remove the awful floral wallpaper designs!

What is the Best Way to Remove Wallpaper from Dryall?

Be careful not to leave the steamer on longer than 30 seconds because you can damage the drywall with too much moisture.

How Difficult is it to Remove Wallpaper?

The answer depends on how well the adhesive has held up over the years.

If the wallpaper has been installed in a bathroom, there’s a good chance the high moisture level has deteriorated the adhesive over time. If it’s in a kitchen or dining room for example, it may be more difficult.

The easiest way is to remove it with a wallpaper steamer.

What is the Best Wallpaper Remover? 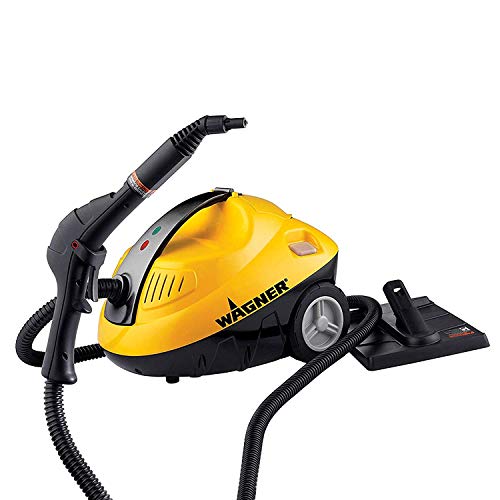 After I inspected the wallpaper in my master bath, I decided to try to remove it with steam rather than chemicals or a spray bottle. My thinking was that if steam was applied to the wallpaper it would begin to dislodge and disintegrate the adhesive so I could remove it with my hands or a putty knife.

I knew that I’d have to get the steam inside behind the wallpaper so using a utility knife I cut lines vertically and horizontally like a grid over the entire wall. Scoring the surface would allow the steam to enter behind and soften the glue that holds it on. The grid squares were 8″ to 12″ in size.

Next I unscrewed the black cap that holds the water in the tank. I poured 3 cups of water inside the machine, turned it on, and waited about 10-12 minutes for it to heat up. I knew it was hot enough when the red light on the back turned off.

The Wagner 915 comes with a few attachments but the best one for wallpaper is a black plastic square. The steam comes through the hose with the removing attachment at the end of it. I held it up to the wall and placed it over the wallpaper for about 25 seconds until it was saturated. I made sure not to leave it on much longer than that because I didn’t want to over saturate the drywall with too much moisture and damage it. 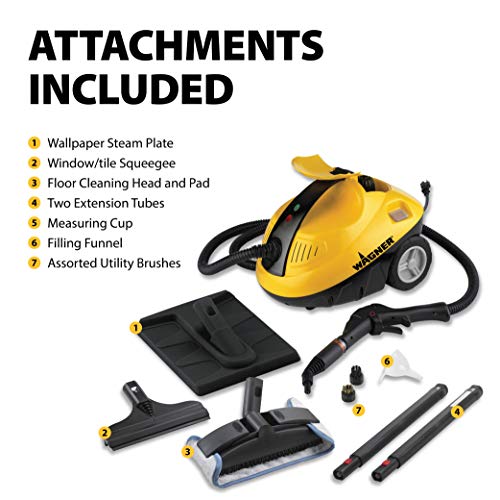 The putty knife or scraper tool was useful because I could scrape the old wallpaper off square by square without me having to remove it by hand. I did need to take a few pieces off by hand, but it wasn’t more than I could manage.

Most of the wallpaper came off easily except for a few hard spots near the corners. The Wagner also has a smaller attachment for corners and hard to reach places that the larger attachment didn’t reach.

Overall I was very pleased with how much easier it was to remove the old wallpaper than any other method I’ve tried.

The Wagner ran for about 45 minutes after I needed to refill it with more water and wait for it to heat up again.

When I was done I turned it off, unplugged it, and waited for it to cool down before I emptied out the rest of the water down the drain.

Features and Benefits of the Wagner Steam Cleaner 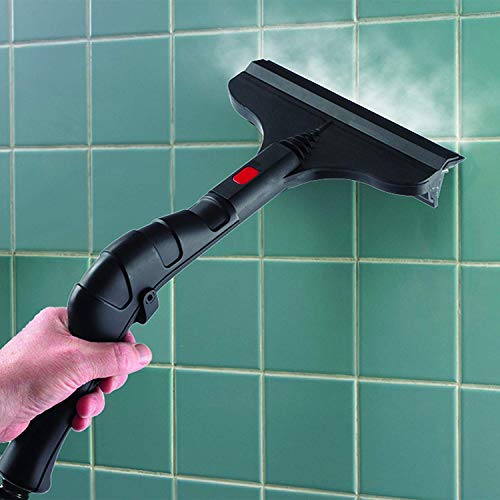 What I liked Most about the Wagner Steam Cleaner

I’ve used it to remove wallpaper, clean behind the kitchen sink and backsplash, the shower floor, and even shower doors. It can be used almost anywhere you find dirt.

I will say that one thing it does not do well is areas that have oil such as car grease or motor oil on a garage floor. Otherwise, it can be used most everywhere else.

Based in Minneapolis, MN, Wagner is known for their spray on paint applicators. Josef Wagner was born in Augsburg Germany and started the company in 1947 repairing machines, motors, and tools. He then made a paint sprayer tool in the mid 1950’s which has carried the company’s legacy since then.

I’m unable to speak to the 915, but I know that I purchased the 705 recently. It was easily one of the best decisions we made. We had wallaper 4 layers deep in one room. I know the only con I had with the 705 is that there is no power button, for starting and stopping. If you plan to be stopping alot and the 915 has that, I believe it may be a beneficial feature for you. We used a dual threat for the wallpaper, but we didn’t do this until we were halfway done. Get a spray bottle, the big one if you want to cover alot of area and spray it down with hot water and vinegar. Once you have done that, let it sit for about 2-3 minutes and begin steaming and it will literally fall off the wall. Oh, that is another con that we have with the steamer.. It takes about 20 minutes to heat up, but that is probably going to be with any of them that you buy. Hope this helps.

I bought a Wagner 705 last month on Craigslist to take down the wallpaper and it has seemed to work well. I took down an entire bathroom with a couple hours of work and the walls were left in good condition. I ended up peeling off all of the vinyl top layer after a light steam. The paper backing and glue came off like butter with some more steaming.

It only took maybe 10 minutes to get rolling when I started using hot tap water. Either way, I just started it before collecting all of my tools. By the time I get back to the room its ready to go. The on demand feature would probably be nice but I just set it down in the tub or a bucket, like you said. Definitely turn it over to dump out any moisture that has collected; it is very hot.

I was on the fence and only decided to make the purchase because i got a great deal ($20). Now that I’ve taken some wallpaper down it is most definitely worth $50. I did lose about 5 lbs during the process though, so get ready to sweat. I also wore long sleeves, pants, and rubber gloves because I didn’t want to get the glue and stuff all over my skin.

I’ve used the 915 as it’ll allow you to clean all sorts of other things, car seats, carpets, nooks and crannies, etc. The 915 is useful for a lot of other tasks around the house but the 705 was really only good for removing wallpaper. You’ll find other uses for the 915.

I was looking for an easier way to get rid of that awful flower patterned wallpaper in my master bathroom for years. I finally got tired of looking at it every day and decided to do something about it.

I found this steamer and it saved me quite a bit of time by loosening the glue that held on the wallpaper. I definitely recommend this tool because it can be used to clean many other things as well.