Have you ever tried to drill a hole in a tight spot and the drill with the bit was too long? Wish you could have a device to reach around at a different angle? If so, you’ve run in to an application where you need a right angle attachment for your drill.

I was working between a couple vertical studs at a corner and the placement of the studs limited my access. I was could almost fit the drill between the studs but I needed this attachment so I could get in and access the right location. Luckily I had one and I was able to get to the right direction with this adapter.

Other examples are if you need to drill a hole in a cabinet with a tight space or under a counter with limited room, this adapter enables you to do just that, drill from a better angle. There are many manufacturers, but which one is the best? I’ll take a look and show you why this one is the best on the market.

What is a Right Angle Drill?

A right angle drill is either a drill or an adapter that uses gears to transfer the motion of a drive shaft at a 90 degree angle. It is useful in tight spots where a normal drill would not be able to reach.

How do You Drive a Screw at an Angle?

If you don’t have enough clearance to drive a screw at an angle, you may need an adapter to change the angle from which you’re driving it. You can also try manually with a short screwdriver, but you may not have enough leverage. Grab a right angle adapter and get the job done quickly.

Features and Benefits of the DeWALT Adapter 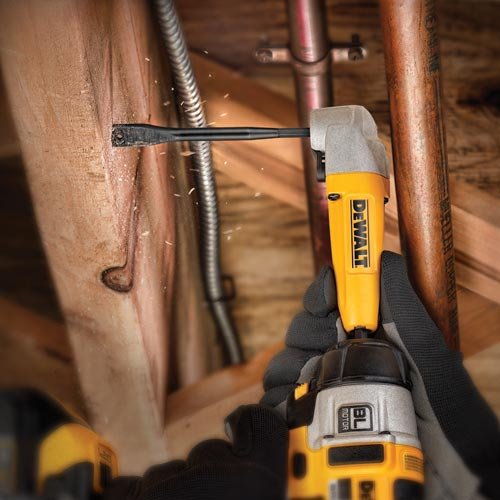 True 90 degree angle. Fasten in tight spaces more easily. Drill between studs without problems. Have you noticed yourself drilling at an angle before because of a lack of clearance? This is one of those tools that is right for the job. Many didn’t know they needed it before.

Accepts 1/4″ hex bits. If you already have a hex fastener set, you’re good to go. However you may need to buy a set of hex drill bits if you don’t have any. The DeWALT Right Angle Attachment will fit into both impact drivers and regular drills with a manual chuck. The main benefit of accepting hex bits is that it give the flexibility to either drill holes or drive screws.

If you’re trying to drive a screw head at an angle and not directly head on, there’s a good chance you can accidentally slip and grind or cam-out the inside of the screw head. An adapter is the solution so you can drive the screw head on.

Bits and extensions can come out. One point of criticism from reviewers is that bits and extensions will come out easily of you’re not careful. Every situation and application is different, but just be extra careful if you’re drilling inside a wall or a location where you won’t be able to get the bit back if it drops out.

Easier to strip screws. Some reviewers noted they stripped screws easier than a regular drill. This may be because it’s harder to judge the angle from which you’re fastening if your eyes aren’t directly over the drill like they would be normally. It’s easier to strip a screw if users don’t apply the bit at the correct angle. Try to put your eyes in a different location or angle to make sure you’re head on.

It’s always important to take a look at what other customers say about a product to get a good feel for all the positives and negatives. We’ve curated reviews about the to show feedback from other users and independent sites.

Our friends at Canadian woodworking like the short depth of the head allowing ease of use in tight spaces. They note the strength of the materials, durability, and how robust it feels. Carl writes that it holds bits well, allows for access in tight areas and recommends it overall.

Be The Pro Forums

The resident sign guy @ Be The Pro Forums noted he had some trouble removing 1″ bits that were too short and didn’t leave enough room for removal. Overall, he liked the build, found it easy to use, and it transferred all of the power from the driver to the fastener. He found a use for it when doing some plumbing work on a house one weekend and it was the only tool that would allow him to fix a pipe by driving some screws in 2×4’s in a tight spot.

Read more at Be The Pro 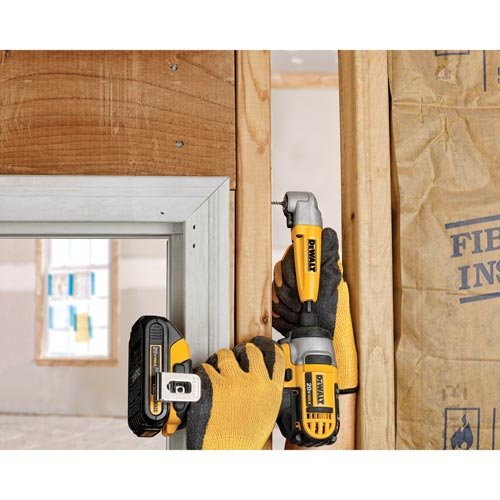 One verified purchaser found the Right Angle Attachment much tougher and more durable than he presumed. He did have some trouble with the bits jamming but only because of the off center angle he was using it at. It completely exceeded what he was expecting.

Another verified purchaser was installing a security system sensor on the top of his door and had no way to drill the hole with a regular drill. The DeWALT Right Angle Attachment enabled him to drill from all sides with the clearance he needed. He did think the extension was small but was pleased overall.

Another reviewer used the right angle attachment with his impact driver and exclaimed how easy it was to fit in places even a stubby screwdriver won’t. He usually doesn’t like DeWALT tools, but this accessory is the only one he likes.

Raymond E. DeWalt started the company in 1924 when he invented the radial arm saw. He grew it quickly and sold it in 1949. Not long thereafter, Black & Decker purchased the company in 1960. DeWALT is now headquartered in Jackson, Tennessee.

Today, DeWALT shares in the Flags of Valor and Wounded Warrior Project for veterans. They remain committed to hiring veterans, donating tools, and contributing to charities.

If you’ve got a tight spot to drill or fasten in, the DEWALT Right Angle Drill Attachment is one of the best accessories you can purchase for your impact driver or drill. It fits in to any drill, takes hex bits, is small, compact, and very durable. You may not need it all the time, but it’s a big a time saver when you do need it.

DeWALT continues to innovate and improve upon their long history of tools. This one does not disappoint and comes highly recommended.