Before now you may have been using the age-old method of hammering a small nail into the wall until it you find a stud or you have used a magnet to locate old nails in the stud. While these are ways can be effective, they are extremely time consuming and, quite frankly, require a lot of extra hard work!

Luckily, we have found and tested the best professional stud finder available, so you don’t waste any more time when you could be starting other fulfilling DIY projects.

How Do You Use a Stud Finder?

The tool itself can seem a little daunting to use because it looks like a weapon brought into the present from a sci-fi-esque future world. But we can assure you that it is very easy, you just need to follow these steps:

It really is that simple! Just be mindful of the fact that sometimes the reader will pick up different masses in walls such as copper plumbing pipes. Just be aware of where your water lines run if you are working on the other side of a bathroom for example. If you believe you found a copper water pipe, check to see if there are other studs placed either 16 or 24 inches apart so you can decipher whether the reading was correct.

What is a Stud Finder?

A stud finder is a device that allows you to quickly locate studs within the walls enabling you to hang artwork, put up shelves, mount a TV, and more.

How Does a Stud Finder Work?

A stud finder detects the change of density between an empty cavity and the stud inside a wall. It does this by detecting capacitance or the difference between the electric charge of the stud compared to the non-stud part of the wall. 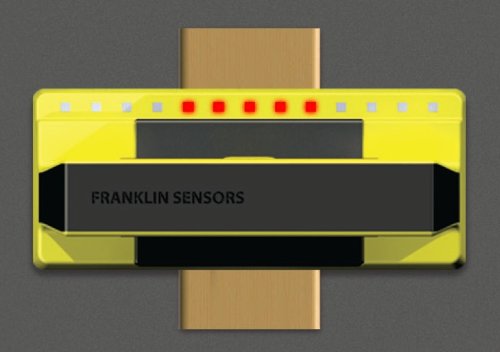 What Should You Look For In a Stud Finder?

When buying a stud finder, there are definitely some features that you should consider before you decide on the exact make and model.

First, you will want to take a look at the type of sensors they have. Typically, you will find ones with magnetic sensors or electronic ones.

Magnetic sensors can be used without any power source since they just search for nails or drywall screws that were put in place when the sheetrock or drywall was installed — yes, these are the most affordable.

Stud finders with electronic sensors detect the capacitance (as we discussed earlier) and are therefore more expensive and sometimes trickier to use than their magnetic cousins. With that being said, they are far more accurate, come with digital displays and some will have various modes of scanning.

Second, the sensor size is important to think about. Put simply, larger sensors are more efficient as they cover a bigger area in less time, allowing you to get the job done in time for a well deserved coffee break.

Third, the physical design and grip should be thought about before you make your purchase. The device should fit nicely in your hand and let you keep a firm yet comfortable grip on it all times. When you are scanning, you will want to do so in as smooth a motion as possible so you do not disrupt the sensors — hence why you need a strong grip. Preferably, find one with rubber grips on the sides as this will increase your chances of holding it properly.

Last, figure out whether you want any additional scanning features included in your device. Just remember though, this comes at a price!

Features and Benefits of the ProSensor 710

The best professional stud finder (in our humble opinion, of course), is the Franklin Sensors ProSensor 710 that comes with the following features: 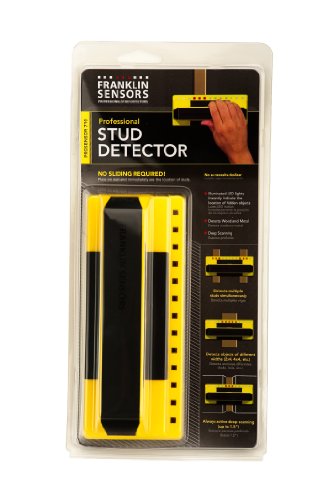 While all of these features are brilliant, there are a couple which truly makes this device the best professional stud finder out there.

First and foremost, advanced Multi-Sense technology is included which, at such an affordable price, is astounding! This is what allows it to locate multiple studs simultaneously and look at numerous spots on the wall all at once. This is a great way to determine if the studs in your house are 16″ or 12″ on center. The rest of the house should typically be the same.

Video Review of the Franklin Prosensor 710

The minds behind this miraculous device are those at Franklin Sensors. In fact, the founder of the company created the ProSensor 710 due to the fact he was carrying out DIY projects in his home and realized the stud finders available didn’t work well enough! He would use his stud find and mark where the stud was. Then scan again and mark in another spot. When he was done, he had marks all over the wall that didn’t line up! That is what sparked his idea to start his company which has been known for their accurate and easy to use stud finders since 2009.

I have one of those Prosensor models. Love it, haven’t found a better one yet for deeper buried studs. I picked one up after going through 3-4 of them trying to figure out where my studs were after a double-layer 5/8″ drywall install.

One reviewer says this is the stud finder you’ve been looking for. It was 4 for 4 on finding studs and it has been correct every time for him.

Another reviewer loves the display because it shows a visual representation of where the stud is. Not just a light on indicating where the edge of the stud is.

You are more than welcome to shop around and attempt to find a stud finder that has more beneficial features at a better price if you like, but we know you will be satisfied with this one! The ProSensor 710 is the best of the best.