A framing nailer can be a great time saver if you’re finishing a basement, adding a wall, toe nailing, or adding studs to a frame for drywall. Are you tired of a loud air compressor and having to stop work to wait for it to fill back up? Let’s take a look at the best cordless framing nailer, DEWALT DCN692B 20V Max XR Brushless Dual Speed Nailer.

Features and Benefits of the DeWALT Cordless Framing Nailer 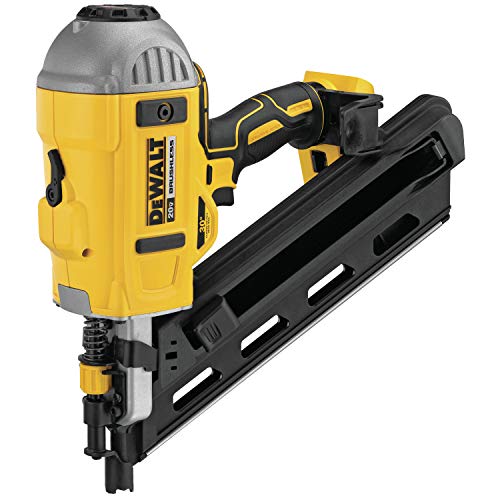 Battery Powered. Imagine being able to work without being tethered to an air compressor when framing. That means you can take this nailer anywhere to work on attics, roofs, and fences.

Two Speed Settings. Most pneumatic nailers will have a setting to choose what size nail to fasten because each needs a different amount of force for impact. Choose appropriately depending on if you’re using shorter or longer nails.

Battery Powered. As great as it is to be cordless, your battery will eventually run out. It’s best to keep a few extras around. If you’ve already bought in to the DeWALT system, you’re likely to already have a few. The total number of shots per charge will change depending on which speed setting you use and the age of your battery.

It jams sometimes. This can be typical for many nailers. Just be sure you’ve chose the right speed setting that’s located on the body just behind the handle. Also use DeWALT nails if possible.

Raymond E. DeWalt started the company in 1924 when he invented the radial arm saw. He grew it quickly and sold it in 1949. Not long thereafter, Black & Decker purchased the company in 1960. DeWALT is now headquartered in Jackson, Tennessee.

Today, DeWALT shares in the Flags of Valor and Wounded Warrior Project for veterans. They remain committed to hiring veterans, donating tools, and contributing to charities.

It’s always important to take a look at what other customers say about a product to get a good feel for all the positives and negatives. We’ve curated reviews about the DEWALT Cordless Framing Nailer to show feedback from other users and independent sites.

Independent Reviews and Feedeback on the DeWALT Cordless Framing Nailer 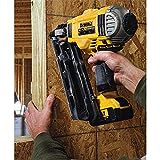 According to Pro Tool Reviews, the DeWALT nailer is a little slow, has a small magazine, and can be heavy at times. However, the nailer is very convenient and they’re willing to overlook the shortcomings based on the convenience factor.

John @ AZ DIY Guy visited the DeWALT press event and took the DeWALT Cordless framing Nailer for a spin. He found it a little heavy, felt the magazine was small, but liked the rafter hook feature. He also liked the safety cover for the head when working on delicate materials you want to protect. He did end up sending it to a service center after it started jamming on him, however he did find he needed to use DeWALT or Bostitch nails and then the jamming stopped.

What Other Customers Say about the DeWALT Cordless Framing Nailer

One verified purchaser from October 2018 loved using the cordless nailer for framing work and learned she had to use DeWALT nails to keep it from jamming. She’s done minimal maintenance, learned to use the tool, and also found she could use Paslode nails with the black tips without jamming.

Another verified purchaser from December 2014 bought the cordless nailer to build some walls in his basement, work in the shed, and other small repair jobs around the house. He found it could use it a long time on one battery using 3-1/2 galvanized nails without any jamming issues. He loved the freedom of no air compressor and no hoses to trip on.

One reviewer purchased the nailer to repair a broken fence surrounding his backyard. He considered running his air compressor all the way to the fence but decided against it and purchased the cordless nailer to make his job much easier. He preferred it over hammer and nails too!

While the DEWALT Cordless Framing Nailer does have it’s drawbacks, the convenience is such a positive benefit that you can overlook most of the negatives. In fact, using DeWALT, Bostitch, or Paslode nails can almost get rid of the jamming problem completely. It’s the best tool to pick up quickly and get to work framing or any home project.

This cordless nailer is perfect for the homeowner who is DIY and doesn’t already have an air compressor or a pneumatic nail gun. If you’re a professional contractor, this may not be the right tool for you.

DeWALT leads the market in their growing 20V lineup of cordless tools. When you buy in to DeWALT you get in to their complete system and can rest assured that you’re buying one of the best brands backed by a company with a great American history.